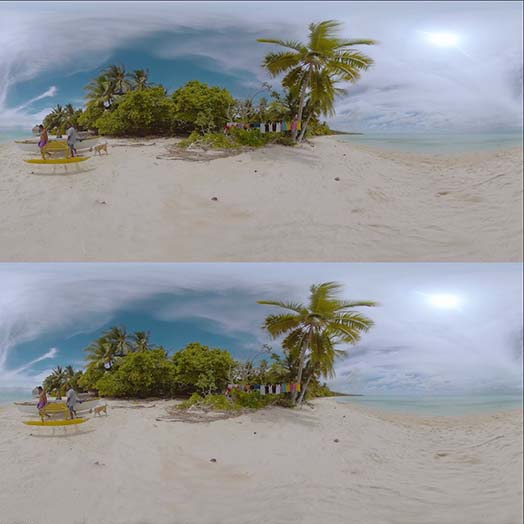 I used Mistika VR to stitch the Mattieu’s footage from the Kandao Obsidian 6-lens VR camera. My background in stereography was helpful in achieving a comfortable stereo-grade for the project. 3D 360!

Anote’s Ark humanizes climate change by following two characters who will lose their country (Kiribati) as a result of the rising sea levels. This film was shot over many years, with a variety of different cameras. The technical challenges of this film included managing large amounts of stabilization, matching camera styles and integrating an array of archives from high quality 16mm scans to low-quality flood footage from a cell phone.

Multi-screen art documentary exploring the life and art of Leonard Cohen. Kara did a masterful job editing this multi-screen piece in After Effects. The images flow across the 5 screens in many different screen combinations (Different image on each screen, large image across 3 center screens,  wide-image across all 5 screen, etc.) This is a pleasure to watch, but hell to conform in DaVinci Resolve! After a few conform tests, we opted to do the color grading directly in After Effects using the integrated Lumetri module. The process was more time-consuming that grading in Resolve, but we could ensure that the complex edit stayed perfectly locked. The new video-scopes in Lumetri were essential for color grading in After Effects.

An exploration of the Japanese “Idol” phenomenon and the underground cultures it has inspired. One particular challenge of this film was to unify the look of scenes that were intercut with 10 different cameras, shooting different frame rates. Often a mix of 29.97i, 25p and 25i footage was intercut in the same scene. This made the conform and online process especially challenging. In terms of color, this film was a real treat, Kyoko asked me to push the color in a way that would echo the sensory-overload of downtown Tokyo. I’m especially proud of the animated titles and subtitle in the film that give Tokyo Idols a bright and playful look.

RUMBLE: The Indians who Rocked the World

The amazing untold story of how Native Americans influenced American music especially the Blues, Jazz and Rock ‘n Roll. I worked in collaboration with Tony Manolikakis at Rev 13 Films to do the post-production finishing. Rev 13 was responsible for the conform, online and some color and I was responsible for color, some 15 animations and archival treatment. Because both Rev13 and Studio Hanneman were using DaVinci Resolve as a finishing and color software we were able to work collaboratively.  It was a technically challenging film on a very tight Sundance delivery schedule – and we made it happen!

One of the key artistic challenges on this film was to integrate many different types of home-movie archival footage raging from Super-8 to VHS and HD. The bulk of the interviews for the film were shot over a 4-year span and included Canon 5D MKII and Sony EX3 footage. The director, Karina, wanted to frame the narrative of her brother in blue/green light and her sister in pink/orange light. In terms of color, this was a fun project to apply different color style/moods to different characters.

A wonderful trip through Mumbai as we follow colourful characters in their daily adventures. This film was a real treat to color grade, India has such a rich and unique color palette.

A documentary video to be used as a teaching resource to inform Quebec couples of the legal and financial distinctions between common-law unions and marriages.

It was an enriching experience to work on so many good projects
alongside a team of talented colorists and post-production technicians.

This film follows Ghanaian investigative reporter Anas Aremeyaw Anas as he goes undercover to set up covert investigations and report on crime. The challenge of this film was to blur and reframe the main character’s face in a way that didn’t detract from the story. The blur styles were adapted to each scene and were then tracked and animated so that they didn’t interfere with other elements in the scene. The main concern when reframing was to maximize image quality. The main technique was using resize keyframes in a way that complemented the hand-held camera movements along with Resolve’s resizing capabilities.

Shot over the course of 10 years, Juanicas is a powerful film that portrays the impact mental illness has on a family. The main challenge of this project was to conform many different formats and frame rates into DaVinci Resolve. The formats on this project included Super 8, DV 4:3, DV Anamorphic, DV Cinema-style (29.97 shot as 24), DVCPRO HD (960×720), HDVi60 (1440×1080), 1080p2398 footage and 1080i60 animations. The film was given a unified “untreated” look while adding just enough “denoize” so that the grain in the low-light footage was not distracting.

This was the first documentary I finished that was primarily shot using the Sony F55 camera. During the color grading process, I was impressed by who much detail I could pull from the highlights. I could also boost the shadows substantially without creating too much noise. I only used my trusty Neat Video Denoiser a couple of times on the entire edit!

Finished using AVID Symphony and DaVinci Resolve, this documentary was shot over several years with a variety of different camera formats and archival footage. The initial conform went very well, AVID really shines with these types of large, complex, multi-format projects.
The main focus of this documentary is music in the Jewish diaspora. I would always find myself whistling the tunes from the doc days after having worked on it!

A challenging post contract where FCP projects are sent from a different location in the world every week. The weeks starts by relinking all media shot from 8 different cameras and then editing in the footage of the judges shot locally in Montreal.

An exposé on how the Montreal Police creatively interpret the citys bi-laws to relentlessly ticket the homeless until they have to go to prison for unpaid fines.

A stylish black and white 16mm cinema-vérité look at the quirky residents of Montreals Verdun Avenues.

THE ULUIT – CHAMPIONS OF THE NORTH

Features a Inuit womens hockey team from Inukjuaq in their daily struggles and victories as they train and play for the Great Whale Cup.

Follows young Canadian classical music talent as they compete for a chance to play prize instruments loaned by the Canadian Council for the Arts.

This documentary chronicles the lives of sex workers in Quebec and illustrates how psychologically and physically damaging this profession really is.

Short dance film based on the true story of a dancer who lost mobility after a stage accident. Electrifying and heartfelt.

A fun documentary that follows 4 dances whove reached their 40s. A mix of dance performance, interviews and animations.

Illustrates in cinema-vérité style the incredible hardships of a displaced peasant family as the parents try to make a living in the far away garment factories. They try to return home for the Chinese New Year holiday but so are 130 million other workers. Cinematic and haunting, one of my favourite shots is a train going over a bridge in winter. Apparently, they had to hike all day to get that shot, it was worth it!

BAS! BEYOND THE RED LIGHT

Touching documentary shot in Mumbai following 13 girls at a shelter that rescues girls imprisoned in the underground sex industry.

A documentary following the unique trials of a woman taxi-driver in Morocco. A frank look at womens issues in an islamic country. She drive an old beat-up 1970s Mercedes sedan vey stylish.

A fun project following sport event streakers, and focuses on the story of a notorious Spanish streaker “Jimmy Jump”.

Veteran producer/director Peter Wintonik goes on a road trip with his daughter to visit sites of historical significance in the evolution of cinema and communication.

Partnered with Centaur Theatre for several years helping with video and broadcast needs.

An intimate portrait of a Chinese family displaced by the 3 Gorges Dam flooding on the Yangtze river. This story, directed by Yung Chang, illustrates on a human scale what is happening in China: modernisation, urbanization, epic infrastructure projects and government power.

TO DUBLIN WITH LOVE

A nice heartfelt, musical, road-trip documentary by veteran producer/director Barbara Doran about the cultural connection between Newfoundland and Ireland.

12 DAYS OF CHRISTMAS – TAKING BACK SUNDAY

Animator/illustrator and film director, Darren Pasemko hired me to finalize his music video project. Very funny short piece, totally off the wall animated video. Darren gave me a fun challenge, to make this animation look like it had been recorded to a VHS tape!

This was a fun project with a punk aesthetic. Roach, the director, asked me to do some animations illustrating some of his narration. After he saw what I could do, he said “wow! Can you make the Canadian Parliament Buildings blow-up??” And I did, with After Effects explosives.

This was my first color grading / online contract. Mila, the producer and DoP for this project warned me that the film was shot with different cameras formats in challenging lighting conditions.

After the project had aired, I was happy to receive me an email from Mila saying how the broadcaster thought the project looked beautiful and flowed well. It was the start of my independent color grading career and ongoing collaboration with EyeSteelFilm.